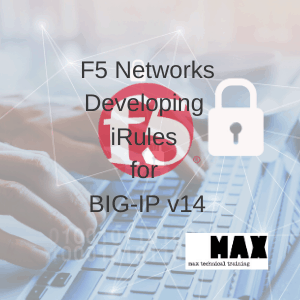 This course provides networking professionals with a functional understanding of iRules development. The course builds on the foundation of the Administering BIG-IP or Configuring LTM course, demonstrating how to logically plan and write iRules to help monitor and manage common tasks involved with processing traffic on the BIG-IP system. Extensive course labs consist of writing, applying and evaluating the effect of iRules on local traffic. This hands-on course includes lectures, labs, and discussions.

Lesson 1 : Setting Up the BIG-IP System

Lesson 2 : Getting Started with iRules

Lesson 7 : Working with Numbers and Strings

This course is intended for system administrators, network administrators and application developers responsible for the customization of traffic flow through a BIG-IP system.

Sorry, we aren't online at the moment. Leave your message and we'll respond to you as soon as we're back in the office!

We'll get back to you as soon as possible.
Start Chat Now

I'm here if you have any questions.

Help us help you better! Feel free to leave us any additional feedback.