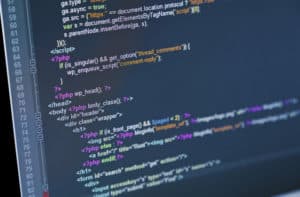 US News has stated that Web Developer was one of the top 25 jobs in 2016.
They report the following:

Web Developers build websites, working with software applications or writing code to get the job done.

There are currently over 1 billion websites as reported by Internet Live Stats. The need for website developers to build new websites and to maintain current websites make this a stable career path. It is not necessary to have a 4 year college degree to be qualified as a web developer. In fact, many college grads are turning to IT Bootcamps to learn web design and web developer skills due to high starting salaries. In under 3 months the skill set necessary to succeed in a career as a web developer can be learned. 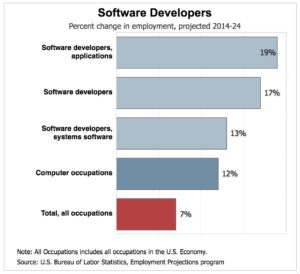 The Bureau of Labor Statistics predicts a growth rate of 17% from 2014 to 2020 for software developers(this includes web developers). This is much greater than the average for all other occupations. The also report a median annual salary of $100,690 in May of 2015.

The need for new applications on mobile devices and tablets will help increase the demand for application software developers.

The health and medical insurance and reinsurance carriers industry will need innovative software to manage new healthcare policy enrollments and administer existing policies digitally. As the number of people who use this digital platform increases over time, demand for software developers will grow.

Systems developers are likely to see new opportunities because of an increase in the number of products that use software. For example, more computer systems are being built into consumer electronics and other products, such as cell phones and appliances.

Concerns over threats to computer security could result in more investment in security software to protect computer networks and electronic infrastructure. In addition, an increase in software offered over the Internet should lower costs and allow more customization for businesses, also increasing demand for software developers.

Some outsourcing to foreign countries that offer lower wages may occur. However, because software developers should be close to their customers, the offshoring of this occupation is expected to be limited.”