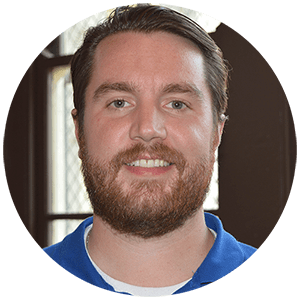 Andrew Robison made the best career change – from Chef to Software Developer.

He had been a chef since graduating from the Pennsylvania Culinary Institute with an Associate Degree in 2006. He was a Sous Chef at several restaurants in Pittsburgh, Detroit, and Cincinnati, and was finding the industry a major challenge. He felt exhausted from a lack of work/life balance with 12+ hour long shifts, working every weekend. He didn’t see himself growing professionally in the restaurant industry with its high turnover and excessive demands.

One of Andrew’s closest friends works at Great American Insurance, a highly respected Fortune 500 company in Cincinnati, as a Software Development Lead. He suggested Andrew consider transitioning into Java development through the Developer Apprentice program at MAX Technical Training. Great American and MAX partner together to help train many of their new hires and existing employees, and there was a high degree of confidence in the efficacy of this bootcamp training approach. After achieving a high score on the Walden Aptitude test and several interviews with the MAX staff, Andrew left his position as a chef and began the Java Developer Apprentice program in April, 2015. The instructor quickly realized that Andrew was a gifted student, despite not having any experience in the IT field whatsoever. He often led group discussions, showing excellent analytical skills and readily learning complex development languages.

Andrew was noticed by Great American Insurance as being an astute, articulate entry-level developer, and was hired in late June, 2015 as an Associate Application Developer. His salary is $46,000. With an excellent mentoring program in place at Great American, early feedback from his supervisor is exceptional. Given his background in the kitchen, along with his intense training at MAX Technical Training, Andrew is feeling confident about his current role, as well as his ability to grow exponentially at Great American.

Inspired by Andrew’s story? Yours could be next; start a new chapter in your career. Contact us to see if one of our Developer bootcamps is right for you. Schedule a free 10 minute consultation.